One of my areas of study is the history and practice of design research. As Victor Margolin noted in 2010, design research encompasses a broad selection of activities that generally coalesce around two general goals: either to understand design’s place in the world; or to improve the results of design activity. One example that covers both poles is Bill Stumpf’s 1977 research project for the magazine Design Quarterly, when he and his team studied Julia Child’s Kitchen as a designed object.

Design Quarterly was a long-standing American publication supported by the Walker Art Center in Minneapolis (Minnesota). Between 1946 and 1953 issues 1–28 were published under the original title Everyday Art Quarterly. It was re-named Design Quarterly in 1954 with issue 29 and continued until 1996 with the culminating publication of issue 169. In the 1970s and ‘80s it flourished largely due to the vision and efforts of Mildred S. Friedman. During this rich publication history, DQ (Design Quarterly) chronicled concerns of the design community and profiled the work of practising designers of all disciplines. In 2014, Andrew Blauvelt – at the time senior Curator at The Walker Art Center – led a critical archival initiative to digitize key issues of Design Quarterly. 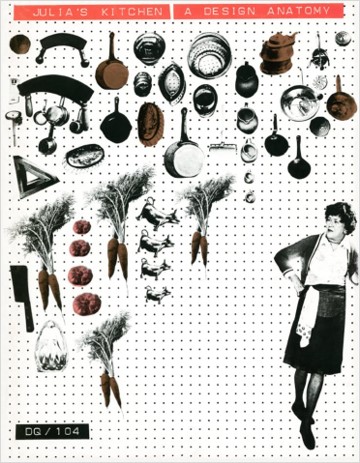 For DQ # 104 in 1977, Bill Stumpf’s “A Design Anatomy” project looked closely at Julia Child’s kitchen in Cambridge, Massachusetts. By this time, Julia Child had established a professional reputation as a chef, author, and television personality who introduced the American public to fine French cuisine. Her popular television shows were filmed in her own kitchen, which reveals her tools and techniques. It is worth noting that Ms. Childs eventually donated the kitchen as a cultural artefact to the Smithsonian Institution’s Museum of American History in Washington DC, where it is now on display.

This was an interesting project for Stumpf (1936-2006), an industrial designer with a successful established practice. For this involvement with Design Quarterly, why did he choose to focus on, in his words, “design research into the why and how of working environments”? First, he had observed that industry, or the design world at that time, typically pandered to immediate market interests, seeing research narrowly through product eyes, and wished to broaden that scope. Through experience, he recognized that designers rarely have the time, motivation or money required to carefully analyze a philosophical question – and proposed this as a published example of doing design research differently. Finally, he was interested in the subject of food and cooking and wanted to learn from an expert in the field – a user who had ‘designed’ her own work space.

How did he do this? He did not build models of the kitchen work area in order to study its materials and construction. He did not use an iterative series of sketches to study the morphology of the kitchen and its tools, focusing on shape, form, and surface rendering, as well as their interconnections. He did not seek corporate sponsorship in order to create a new brand identity for Julia Child as cookbook writer and broadcaster. Instead, Stumpf and his team embedded themselves on site for three days in order to observe the configuration and operation of the kitchen, as well as the user’s experience of it.

Based on ethnographic research methods used in Anthropology, this observation strategy permitted a thorough understanding of user, tools and task, all supported by empirical evidence. Stumpf’s project for DQ #104 covered these topics:

The project is interesting and relevant to a general study of design on many levels, not the least of which is its link to television-based celebrity culture, gender issues, and the changing role of women in popular culture. Child’s kitchen is studied as evidence of vernacular design (everyday subjects) revealing traces of its maker’s interests, movements, and identity. Items, surfaces, appliances, and cabinets are carefully photographed, described, and mapped in the space. The project is also evidence of design research methods that are helpful to designers, such as user observation, ergonomic studies, movement and systems research. Bill Stumpf, the researcher who led this documentation of Child’s kitchen, was a successful industrial designer who integrated these methods into his critically-acclaimed design practice.

It would be interesting to explore this example further and trace any lasting influence of this published project in both the design community at the time as well as for the emergent field of design research.